Your annual meeting $20 Bill Credit was applied to your November bill.

Thank you for attending and registering for the 69th Annual Meeting of the Golden West Telecommunications Cooperative. As indicated at the meeting, this year’s registration gift – a $20 bill credit – has been applied to your bill this month. Look under the “Account Changes” header to see the “Annual Meeting Registration Bill Credit” to verify the credit. Golden West appreciates you, your membership, and your participation in the meeting. This month’s bill credit is a small token of that appreciation.

WALL, SD – Over 200 members attended the 69th annual meeting of the Golden West Telecommunications Cooperative on Saturday, Sept. 25. They heard from the president and general manager, elected board members, and decided on proposed amendments to the co-op’s articles and bylaws.

Board President Touts Rising Above Challenges
In his report to the membership, President Jeff Nielsen discussed how members and the cooperative both faced the pandemic over the past year and a half. He emphasized that together, everyone rose above it.

“In a year when more people than ever found themselves working or learning online, strong and reliable internet connections were crucial – and Golden West’s network delivered,” Nielsen said.

Golden West General Manager Denny Law addressed attendees next. He reiterated Nielsen’s message about everyone rising to the challenge over the past 19 months. In doing so, he said the importance of improving infrastructure and the resiliency of Golden West employees and communities were both proven.

“With thousands of miles of fiber optic cable buried underground, it’s clear that infrastructure is a crucial investment for Golden West,” Law said. “But it’s not our only investment. Without great employees, we would be unable to provide great service."

Members in Attendance Win Prizes
While there was no entertainment this year, over 20 prizes were given away including gift cards, beef certificates and cash. Dan Paulson of Quinn won the $500 grand prize drawing. Members enjoyed a complimentary lunch at restaurants in Wall following the meeting.

Registered members will receive a $20 bill credit as a thank you for attending the meeting. A grand prize of $500 will be drawn during the meeting as well as 20+ additional prizes; must be present to win.

*Please note the change in location and time of the meeting. Golden West is making every effort possible to provide a safe environment for our members and employees.

Members will have the chance to vote on the proposed changes to the Articles & Bylaws at the 69th Annual Meeting.

Review the proposed changes to the Articles & Bylaws here and watch the video below for more information.

To review a complete copy of the current version of the Articles of Incorporation and Bylaws, visit goldenwest.com/coop or contact the office at 1-855-888-7777.

How To Vote at Annual Meeting for Individuals, Businesses & Other Entities

Individual members who register and attend the annual meeting receive one vote per membership. The person who votes must be an owner named on the membership.

Non-individual members of the cooperative, such as school districts, towns, churches, corporations, and LLCs, may designate a delegate to vote on their behalf. To do so, an Authorization to Vote form must be completed and presented during annual meeting registration. This applies to all businesses, regardless of organizational structure.

Each member of the organization should designate a representative who is an officer, stockholder or member of their organization. The Authorization to Vote form appears in the latest issue of Horizons hitting mailboxes after September 14 and can be downloaded below.

Any member requiring special accommodations to have full and equal participation in the meeting is asked to contact the Golden West business office at 1-855-888-7777, option 3, prior to the meeting.

Below is the Authorization to Vote form. Click HERE to download a .pdf version to print and complete. 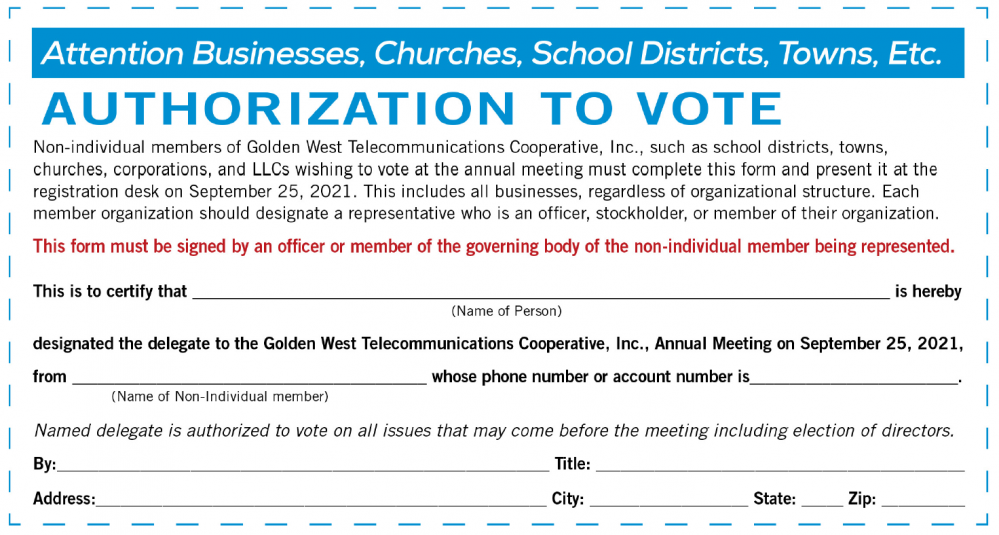 WALL, SD – Golden West Telecommunications Cooperative members who attend the 69th annual meeting on Sept. 25 will vote in director elections and on proposed amendments to the organization’s Articles of Incorporation and Bylaws. They will also have a chance to win $500.

The meeting will start at 10 a.m. on Saturday, Sept. 25, in the Wall High School gymnasium at 401 South Blvd. in Wall. Registration will run from 8:30 to 10 a.m. Attendees should park and enter on the west side of the building. The time and location will allow for a simplified schedule and provide more space for social distancing.

Safety Remains a Priority
With COVID-19 still circulating, Golden West is once again implementing safety precautions to help reduce the spread. In order to reduce movement and mingling, tickets for a free lunch from one of four restaurants will be distributed to all attendees at the end of the meeting and can be redeemed until 3 p.m. Registered members attending the meeting will automatically be registered for cash and door prizes, including one $500 grand prize. Members must be present when their name is drawn to win.

“The annual meeting remains an important event for our cooperative,” said Golden West General Manager and CEO Denny Law. “We are committed to keeping our members and employees safe while conducting business in a timely and efficient manner.”

The revised schedule also involves drawing for door prizes as ballots are counted in lieu of entertainment. Hand sanitizer and masks will be available to attendees.

Four of Golden West’s 15 board seats are up for election this year with two incumbents running unopposed, and two incumbents facing challengers. All director terms are four years. Co-op members may vote in all board elections regardless of their district of residence from among the following:

Members will also vote on proposed changes to the Articles of Incorporation and Bylaws. Proposed amendments include general language cleanup, director qualifications and requirements, and flexibility for membership communications, meetings, and voting.

Members were sent a Notice of Proposed Amendments to the Articles of Incorporation and the Bylaws of Golden West Telecommunications Cooperative with this year’s annual report. The notice provides a general overview explanation and details of the proposed changes. A short five-minute video at goldenwest.com/annualmeeting further explains the proposed amendments.

How to Vote as Individuals, Businesses

Individual members who register and attend the annual meeting receive one vote per membership. The person who votes must be an owner named on the membership.

Non-individual members of the cooperative, such as school districts, towns, churches, corporations, and LLCs, may designate a delegate to vote on their behalf. To do so, an Authorization to Vote form must be completed and presented during annual meeting registration. This applies to all businesses, regardless of organizational structure.

Each member of the organization should designate a representative who is an officer, stockholder or member of their organization. The Authorization to Vote form appears in the latest issue of Horizons hitting mailboxes after September 14 and can be downloaded and printed from goldenwest.com/annualmeeting.

Any member requiring special accommodations to have full and equal participation in the meeting is asked to contact the Golden West business office at 1-855-888-7777, option 3, prior to the meeting.

Golden West Cooperative members will elect four members to four-year terms on the Board of Directors. To vote, members must be present at the September 25 annual meeting and may vote for a candidate in each district that has a director opening.

JADE HLAVKA – District I, Unopposed Incumbent
Jade Hlavka is a business owner and helps operate the family ranch near Howes. He has served on the Golden West Board of Directors since 2013. Jade graduated from Faith High School and received his degree in diesel technology from Western Dakota Tech in Rapid City.

Jade and his wife, Annie, own and operate H&H Repair. They have three boys who keep them on their toes. Jade is also a volunteer fire fighter for the Enning Fire Department. He enjoys fishing, hunting, and spending time with his family.

Dave and his wife, Diana, own and operate Assman Implement, a farm equipment dealership started by his parents in 1969. Diana retired from Golden West after 30 years of service. Dave has served on the Farm Credit Services Regional Board for 10 years, Cherry Todd Electric for two terms, and is currently serving as a Todd County commissioner. They have four adult children, the youngest of whom manages their ranching and organic farming operation.

KENNETH ZICKRICK, JR. – District IV, Incumbent
Kenneth “Sonny” Zickrick, Jr., is a lifelong resident of Long Valley. He has served on the Golden West Board of Directors since 1978. During this time, he served as secretary of Golden West Telecommunications and four of its subsidiaries for several years. Kenneth graduated from Kadoka High School and received a two-year degree in accounting from National School of Business. He taught at a country school for one year and worked at an implement dealer and body shop before taking over operation of the family farm and ranch with his wife Echo and brother Bob.

AMANDA ANTOINE – District IV, Challenger
Amanda Antoine was born and raised on the Rosebud Indian Reservation in Mission. She has worked for the Rosebud Sioux Tribe (RST) Enrollment Department for the past 11 years. Amanda currently attends Sinte Gleska University, where she is working toward her bachelor’s degree in business management.

Amanda is a mother of four and active in the community. She volunteers for the Todd County 4-H Club and Girl Scout Troop 72237. She also serves on the Todd County Middle School Parent Committee and RST Education Task Force.

MURDOCK ARTHUR – District VI, Challenger
Murdock Arthur grew up on a ranch in Milesville. He graduated from Philip High School and received his degree in telecommunications from Mitchell Technical College. After graduating, he moved to Wyoming and began a career with RT Communications. Murdock moved to South Dakota in 2013 and worked for Golden West as a plant technician and eventually a supervisor before exploring other opportunities.

Murdock and his wife, Brittany, live at Cactus Flat, where he is pursuing his love for ranching. He enjoys hunting, fishing, and spending time with his family.

DALE GUPTILL – District VI, Incumbent
Dale Guptill was born in Martin and raised on a ranch near Kyle. He has served on the Golden West Board of Directors since 1985. Dale graduated from Kadoka High School and attended South Dakota State University in Brookings.

Dale and his wife, Valerie, purchased their home ranch and raised three children, along with grain, seed, cattle, grasshoppers, and even a few prairie dogs! In addition to three grown children, they have six grandchildren.

BART BIRKELAND – District VII, Unopposed Incumbent
Bart Birkeland grew up on a ranch south of Dupree and currently lives in Gregory. He has served on the Golden West Board of Directors since 2010. Bart received a degree in business administration from Northern State University and worked in the rural electric business for 38 years, including serving as the general manager of the Rosebud Electric Cooperative for 25 years. He is now retired.

Bart and his wife, Karen, have resided in Gregory for 28 years. They have two adult sons, Jeff and Jason, and three grandchildren. He enjoys golfing, woodworking, riding his motorcycle, and spending time with his grandkids.