SHAKEN/STIR - A Tool in the Fight Against Spoofed Robocalls

Receiving unwanted calls, especially robocalls that “spoof” or appear to come from another number, is a top consumer complaint. Thanks to recent action by Congress and the Federal Commissions Commission (FCC), Golden West will soon be able to better protect you from these calls.

“There’s been an eroding faith in the validity of some calls that people receive,” said Golden West General Manager and CEO Denny Law. “Golden West heavily invests in its network both financially and in maintenance hours, and we look forward to having more control over our customer’s user experience.”

What Will It Do?

Once deployed, SHAKEN/STIR will enable phone companies to verify that the caller ID information transmitted with a call matches the caller’s actual phone number.  SHAKEN/STIR will not eliminate spoofed robocalls entirely. However, according to the FCC, widespread deployment of SHAKEN/STIR will reduce the effectiveness of illegal spoofing, allow law enforcement to identify wrongdoers more easily, and help phone companies identify calls with illegally spoofed caller ID information before those calls reach their intended callers.

“Ultimately consumers will benefit from SHAKEN/STIR,” Law said. “Customers will be able to have greater faith that the calls they receive are valid.”

SHAKEN/STIR was developed to meet the requirements of the TRACED Act, which stands for Telephone Robocall Abuse Criminal Enforcement and Deterrence. South Dakota Sen. John Thune cosponsored and introduced the bipartisan TRACED Act which passed both houses of Congress in December 2019. 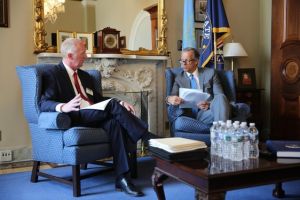 At the invitation of the NTCA – The Rural Broadband Association, Law participated in discussions with other carriers and the FCC. He represented small companies when reviewing options to accomplish the TRACED Act mandates to ensure all companies could comply.

“Golden West is doing a great job putting things in place to prepare for SHAKEN/STIR,” Law said. “The actual deployment will be on a larger scale and dependent upon other carriers. I’m pleased with where we are, and when it’s ready to roll out, we’ll be right at the front of the line.”

Golden West has until June 30, 2022, to implement SHAKEN/STIR on its network.